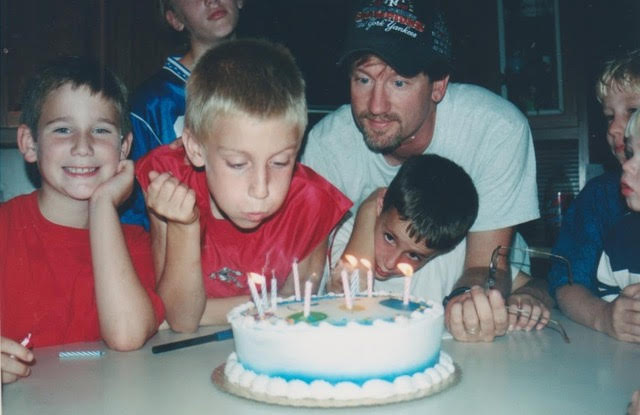 Today would have been Sean’s 27th birthday. I have grappled with his birthday for the past three years. Is this day still his birthday?

His birthday is the triad of three days over a 50-day span which are always difficult for me each year.

I call these 50 days, the gauntlet of grief. It starts in mid-June with Father’s Day followed about 30 days later, it is the day we lost Sean (July 18th) and it ends 20 days later with his birthday, today, August 6th. There is a great sense of loss and anguish felt during these 50 days.

It was not always like this. Before July 18, 2018, the summer was the most festive time for our family. When Sean was younger, the 50 days between mid-June and early August was filled with Little League All-Stars, District Championships, and State Championships and with all of us going on family vacation, usually the week of Sean’s birthday. They were beautiful days filled with warmth, sun and excitement.

As Sean became older the 50 days between mid-June and early August were filled with basketball camps, college visits, and always trips to the beach. Sean’s hair would always turn its blondest and he always had a great tan. He and his siblings spent many summer nights laughing and playing family games, all ganging up on dear old dad. On his birthday, we would always feast on Alaskan King Crabs. They were his favorite. It was a highlight of summer.

As Sean became a man, he looked forward to spending every weekend in Dewey with his closest friends. He relished those long summer nights. The last time most people saw Sean was at Dewey Beach the weekend before the insidious disease of depression took his life and he lost his battle with it.

Sean loved life. He lived life to the fullest. That is why his loss is so hard to comprehend.

Some of his friends are down in Dewey this weekend playing a round of golf just as Sean would have done. Others are having a volleyball tournament in Dewey on Monday, August 9th. It is the first tournament of its type which we hope will become an annual summer tradition. We call it Bump, Set, Light. The event will have 12 very high caliber beach volleyball teams competing. The games start at 5 pm, we hope some of you will stop by.

As for all of you, I think Sean would want us to remember each other the way he treated all of us. Be loving and kind to each other. Smile the way he would  smile to each of us. Take a moment to call or visit the people that are most important in your life.

As for me, today is tough. It is filled with great memories but also great sorrow for what could have been. I miss my little boy that I remember in his Hawaiian shirt blowing out his birthday candles. However, I will remember his birthday by eating his favorite meal, playing his favorite music and imagining having a baseball catch like we did so many times in his life.

Friends of ours, Chuck and Mary Hughes are in Iowa this week. They sent us a picture from the Field of Dreams.

The Field of Dreams is one of my favorite movies. The ending is the ultimate Father/Son moment. I have seen it a hundred times and I cry every time I see it. The son says to the father, “Hey Dad? Do you want to have a catch?” The father’s response is a very simple reply, “I would like that.”

Maybe we remember Sean today by simply having a catch with someone you love and care for.

As to the question, Happy Birthday Sean?

I think Sean would simply say, “I would like that”.