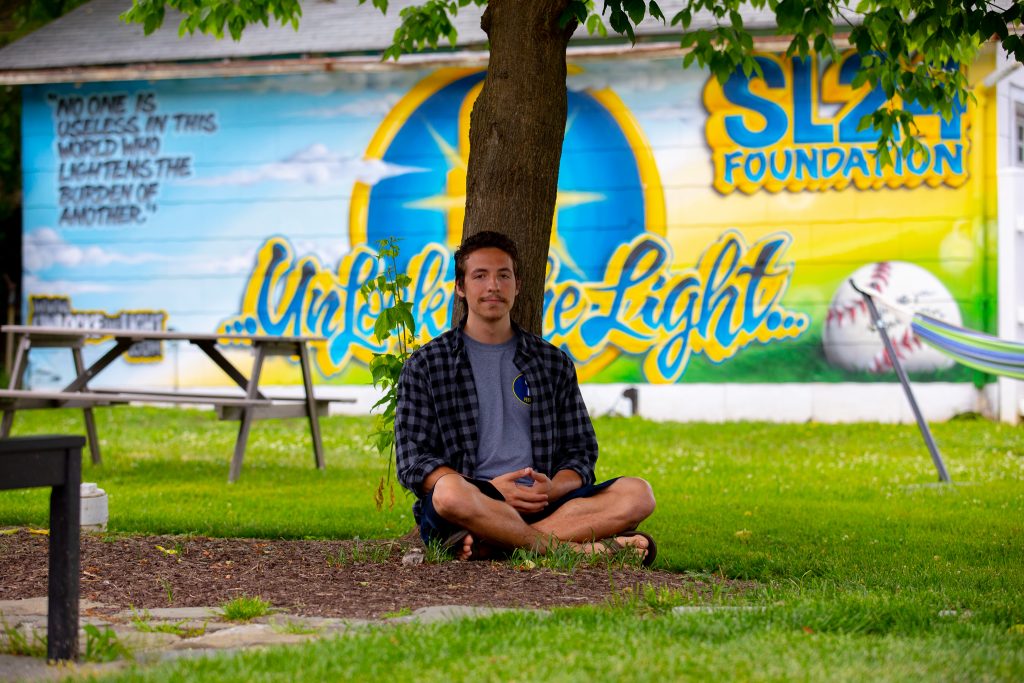 What Is Mindfulness And How Do I Do It?

My name is Michael Szczechowski. I’m a peer leader and resident knucklehead at Sean’s House. When I’m not supporting our peers, you can most likely find me unsuccessfully trying to whip something up in the kitchen here at 136 W. Main.

I recently graduated with a degree in philosophy and neuroscience from the University of Delaware. Somewhat recently I decided to commit to practicing mindfulness regularly, which was something that came up here or there in both my philosophy and neuroscience classes. You have likely heard of mindfulness, maybe from advertisements for apps or from its use in clinical treatments such as Mindfulness-Based Stress Reduction (MBSR). There is also a multitude of cultural and philosophical background to meditation in general; that much I know from reading about it in classes, but up until recently, I had not given meditating a try, as it was something I was unsure about and didn’t know how much I would benefit from it.

First, what is mindfulness?

Mindfulness is a specific kind of meditation. Much like practicing the guitar or shooting a basketball, it is a skill and the ultimate goal of each session is to simply improve.

There are many different ways to meditate, depending on the goal of the meditator and their prior experience with meditating. There is clearly a difference between a Hindu monk who has spent their life in an ashram to learn and practice bhakti yoga, and an American that joins in on their weekly mindfulness session at the local gym.

Anyone can practice mindfulness meditation if they like. There are no cultural, religious, or experiential qualifications to begin practicing. There are no expectations to be a certain kind of person, to be a part of a specific group, or anything like that. You just have to be willing to give it a go.

What is the goal of mindfulness?

In this context, I’m going to claim that it is not about becoming enlightened or developing one’s mental prowess.  It’s also not about practicing to relax yourself on command,  or to fully overcome and eradicate mental demons.

To be mindful is just to have an awareness. I will say that mindfulness is about being aware of what is happening in this present moment, right now.

If you are like me, my initial reaction to reading that might be that it sounds cryptic or condescending, but like most of us, we are consumed with thoughts of the things that you did, the things that need to be done, daydreams, hopes, desires, and all other kinds of past and future-oriented thoughts that you often fail to occupy your mind with the actual present moment, your current state of awareness.

To realize the benefit of being in the present, I’ll go back to my knucklehead status here at the house.

There have been several situations where I might ask a question or might make a small mistake that my coworkers make a joke about and we share a laugh and move on. Or so we think.

But an hour later, two hours, the next day, and the day after those situations,  I find myself replaying them in my head.

“What the hell is wrong with me, why am I such a moron?”

Those are the thoughts that take over my mind. They come spontaneously – often I’m not trying to think about the scenarios, I’m not trying to put myself into a bad mood, but they just come to mind, completely out of the blue.  How many times do these types of minor situations take over our thoughts, minds, actions and attitude?

Perhaps, it is fine to feel a little foolish after making a small mistake, so that we remember to not make the same mistake again. But afterwards, what good does it do to ruminate and think about it? But I remember it, and it causes me some further mental pain.

Now, those are all small trivial examples, but imagine applying it to other things – trauma, abuse, thoughts of suicide and of extreme low self-esteem, stress. The suffering that follows from reflecting ruminating and thinking conceptually about the past, or worrying and muddling in our head our anxieties about the future and what could be, in many ways we create for ourselves. If I was aware that I was having those thoughts about the minor mistakes when they popped into my mind, I could say,

And indeed, the thought would pass. It would. But instead, I thought about it more and more, I followed after those thoughts, so to speak.

I know that mindfulness is a spectrum and that I am just beginning my journey. Now, I am certainly not an expert. But I hope that in reading this, you might consider how mindfulness could be a good thing to try; I am confident from my few experiences practicing that it is very worthwhile, and I am just a beginner myself.

I hope that you consider starting, picking back up, or supporting your own mindfulness journey with us at Sean’s House.  We will be running our first mindfulness session at 136 West Main Street from 4-5 p.m. at Sean’s House this Sunday, June 13th .

With open arms, I invite you to join.